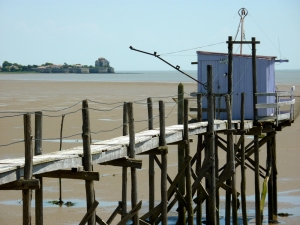 The commune of Arces-sur-Gironde is situated on a promontory overlooking the estuary of the Gironde, where the vines give way to the plain with the outskirts of Royan not far away. With these different factors, the development of the landscape has been modelled by the wind and water as well as the presence of several manor houses and even a château.

The estuary of the Gironde is one of the largest in Aurope and ecologically one of the richest. An environmental and architectural identity has been formed by the water itself, tourism, fishing, marine activities, the landscape or the biodiversity.

The commune of Arces-sur-Gironde, 2,174 hectares large, is situated on the right bank of the Gironde, with the communes of Barzan and Talmont-sur-Gironde between it and the river. However about one kilometre actually faces the estuary. The commune stretches inland about 6 kilometres.

To the north and east, is the champagne region of Saintonge, crossed by several roads and farm tracks. Coming from the direction of Cozes is an open countryside, relatively flat with fields of cereal crops and just a few vines. The plateau reaches its highest point at Conteneuil and at Theon (52 and 53 m high). 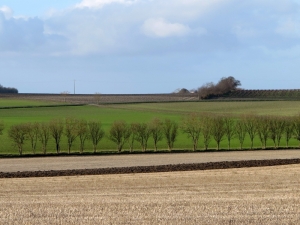 A line north-west/south-east is covered by woods (notably between Chassagne and leMaine-Moutard and near Breuil) and small valleys. In the latter are springs, as at Fontdouce, and little waterways like the one that touches the town, and like the rivers Désir and Bardecille that mark the boundaries west and south-west of the commune.The little valley irrigated by the river Désir and by the streams coming down from the town, is dominated by the road from Arces to Epargnes.

Hills create another line north-west/south-east, leading from Arces to Brézillas and Liboulas and 41 metres high. Along this line of hills, battered by winds from the west, are several windmills. From this highpoint you can see the estuary from Barzan as far as Meschers, including Talmont-sur-Gironde, and the Médoc inland.

A second champagne region slopes down from these hills towards the estuary, fading out along the coastal marshes to the west and south. The marshes of Talmont are the limit of Arces’ territory. The marshes of Barrail are to the west, crossed with ditches creating fields and meadows dotted with hides for the hunt. A ridge to the west, with a farm called Palus, goes as far as a small island, the Dau, and ends at a rocky point where there are ‘carrelets’, the square fishing nets typical of Charente-Maritime.