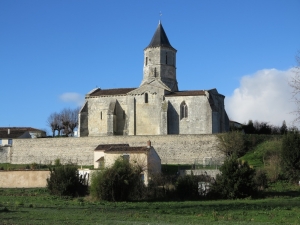 Arces-sur-Gironde is a commune in the south-west of France, situated in the department of Charente-Maritime, in the old region of Saintonge. The settlement is grouped around the market town. The principal hamlets are Liboulas, Brézillas, and Maine-Moutard. They stretch along the D244, bearing the name of the estuary. To the west are the marshes of Barrails, threaded through with numerous channels leading to the Gironde. The area of the commune consists of a succession of hills which dominate the Gironde estuary and an extensive marshy grassland which stretches to the west as far as Talmont and Meschers. The town itself lies at the foot of a chalky promontory and has a beautiful Romanesque church of the XI century, dedicated to Saint Martin.

Although cut and polished silex tools have been found, attesting to a Neolithic period, it was in the Roman period that the village appears to have been founded. It was situated beside the Roman road linking the capital of the Santon area, Mediolanum Santonum, with the port Novioregum, a few kilometres to the west. This is why a Roman camp was almost certainly built on the promontory, even though no traces of the camp have been found, but in the adjacent fields remains of pottery earthenware and amphora have been found. 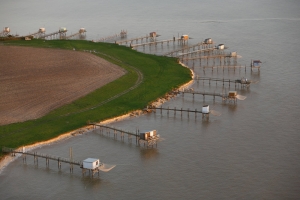 Between 1083 and 1091 Arnaud de Gammon de la Maison de Mortagne, founded the abbey of Vaux and ceded all the rights and privileges to the parish of Arces. The monks installed two priories at Arces, one near the Saint Martin church, the other in the hamlet of Lorivau where a bridge remains over the stream Désir. At this time the economy was based on cereals, vines and some salt marshes between the woods and the Gironde. Arces became a stopover on the Saint Jacques de Compostelle route since many pilgrims crossed the Gironde at Talmont sur Gironde.

In 1151, Benoit de Mortagne invaded the town and tried to seize Saint Martin priory’s land and privileges. Menaced with excommunication, he was forced to retreat and promise to respect the rights of the abbey. For a long time two thirds of the parish belonged to the baronnie of Cozes and the other third to the chatellenie of Talmont 12. Conflicts between the lords and the inhabitants of the village seem to have been a common occurrence. 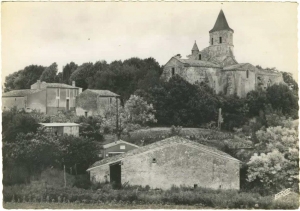 In 1661, Mademoiselle d’Orléans, the successful tenderer of the baronnie of Cozes, demanded new duties of the inhabitants, but was dismissed by the parliament at Bordeaux.It seems severaql noble dwellings existed under the Ancien Régime: the logis of Breuil, château of Théon or that of Conteneuil can still be seen. In the XVII century, the Lady of Théon became famous for her hatred and persecution of Calvinists. This hatred flared up when her domain was besieged by soldiers of Benjamin de Rohan, Duc de Soubise, one of the chief leaders of the Protestant movement and again when her brother was killed during the siege of Royan (1622 or 1624). She had the goods of protestants seized and their houses demolished. Reduced to misery, they took the affair to the duchess of La Trémoille. Having the right, she condemned between 140 and 160 protestants to death, some broken on the wheel, the others hanged. During the Revolution, the parish was transformed into a commune.

The population in 1790 reached 1129 inhabitants, but after the second world War, the rural exodus meant this dropped to 474. Since then the population has begun to increase, reaching 561 inhabitants in 1999. The village now concentrates on agricultural activities and tourism focusing on the countryside.